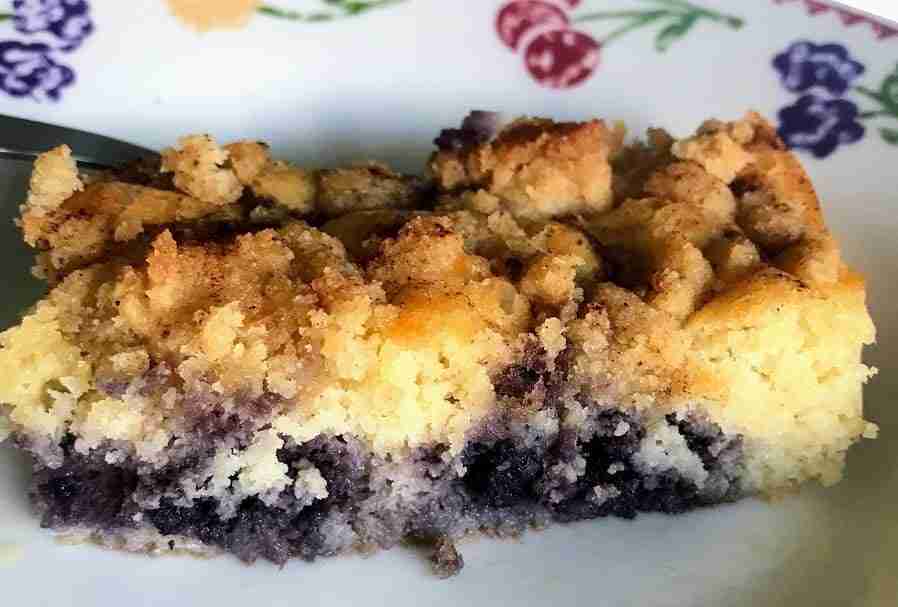 What do you do when you’re bored with keto? You try new recipes! Even though I have a coconut flour keto blueberry muffin recipe already posted, one of my favorite keto chefs recently posted a Blueberry Sour Cream Crumb Cake with an almond flour base. I love her recipes so I was excited to give this one a try playing with the coconut flour ratio. It turned into a delicious Keto Blueberry Cake that’s not a holiday hit for my entire family.

Three very important reasons to consider for diet and budget. So I tried the recipe her way first with the exception of xylitol. She recommends xylitol as a sweetener in most of her keto desserts because it has less of a troublesome effect on your tummy for folks sensitive to straight erythritol. It also cuts down on the cooling effect of erythritol when you mix it with other sweeteners. I’m all out of xylitol and have a bag on its way but I went ahead and made this recipe using a mix of monk fruit and erythritol.

New to the keto diet? Start here! This will help you to figure out how to stick to this diet and make it a lifestyle for you.

Here’s my cake in a standard springform pan as recommended. For me, the cake was too flat. Not enough batter for such a large pan. It was also WAY. TOO. SWEET.

I have made her recipes before using the above mix of sweetener and realized that the sweetener portions were way off for my tastebuds. For me, when erythritol is baked, it’s way sweeter than if you’re simply using it to sweeten your coffee or tea. I cut down on the amount in this recipe and my cake was still way too sweet. Like, scratch your throat sweet.

Munchkin loved it of course.

If you’re lost and not sure how to get started with the keto diet, this meal plan is for you. It’s a fool-proof guide to winning at the high-fat, low-carb lifestyle.

I was instantly filled with regret when I saw the amount of sweetener that was in my bowl. I dumped it right into the butter so there wasn’t much saving I could do. I’m just going to half the sweetener in her recipes moving forward. I’ll take this as a sign that my love for sweets has greatly diminished since being keto. Woot!

So I made this again with the portions below. I still included some almond flour in the batter since coconut flour only recipes can be a little dense and I did love the texture of the original cake. This time, I made it in an 8×8 square pan to get a cake with a little more body.

My crumb mixture had too much coconut flour which resulted in large clumps instead of the original crumb texture so I will continue to use her measurements for the topping, but with half the recommended sweetener.

This cake was delicious. It was much better the second time around for me because the sweetener content was diminished greatly. The texture of the cake itself was also not too far off the original which I was happy with since that means I can get away with more coconut flour and fewer calories and carbs from almond flour.

I know lots of people are averse to the flavor of coconut. I love it but maybe that’s my tropical background coming to the fore. If you’re not a coconut-lover you may want to stick to the original recipe as the coconut flavor was definitely more pronounced in my version.

I’ll try her chocolate chip cookies next! I’ve already made the original version (sans xylitol) which was again, too sweet for me. I’m wondering if adding more coconut flour to the batter will make it more muffin-y and less of a cookie? We’ll see! 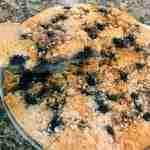 A delicious blueberry cake recipe excellent as a holiday dessert without loading up on carbs.

For the Crumb Topping 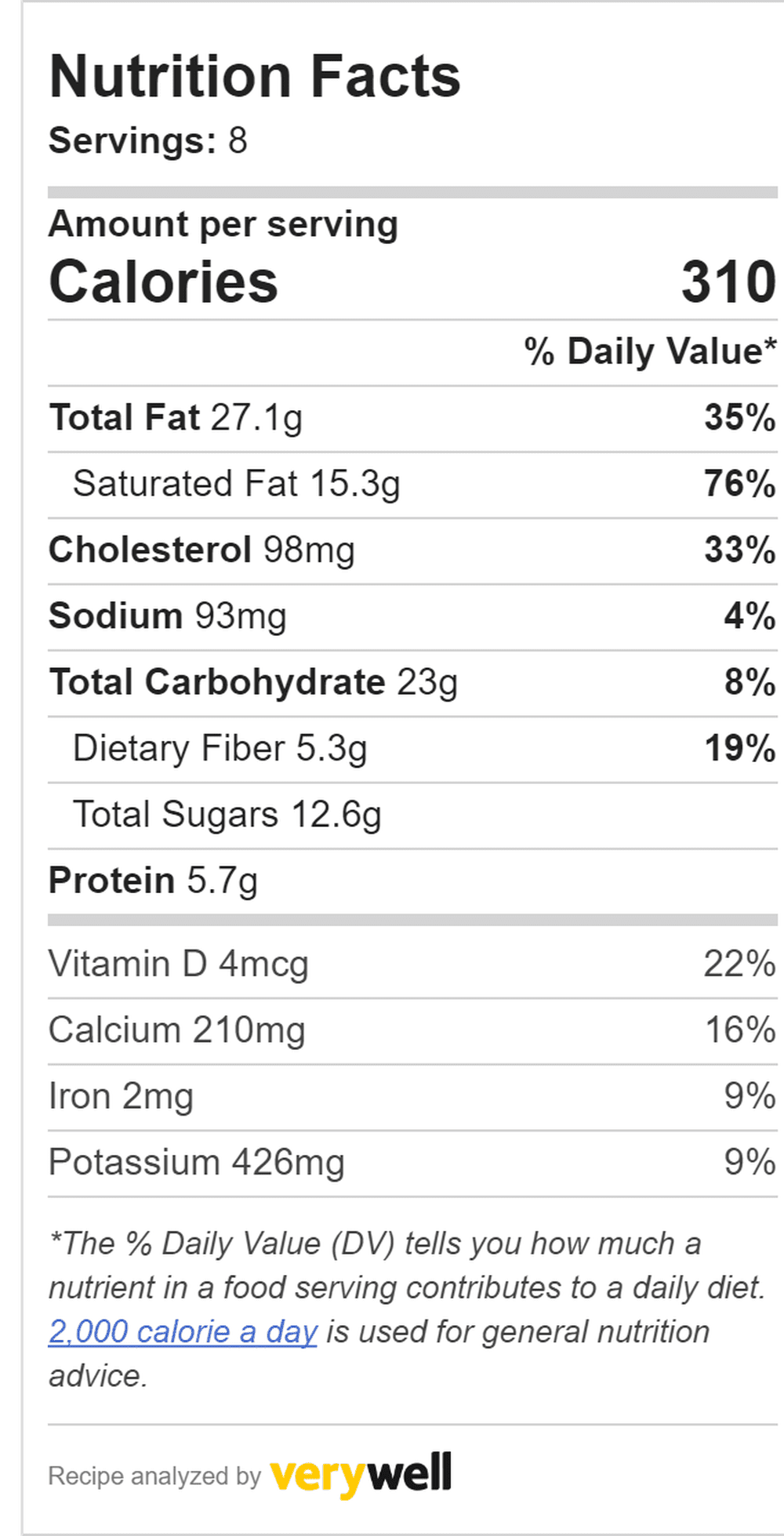 Here are pictures of the cake up close. The texture was a little more soft and crumbly when done with more coconut flour. It’s up to you to decide which version you like but whatever you choose I recommend at least halving the sweetener in the original recipe.

If you’re just starting the keto diet, a food journal specifically for keto like this one can help you to stay on track. Track your meals, macros, mood, fasting times and movement daily to spot helpful and harmful patterns that help you achieve your weight loss and health goals.

I’m definitely keeping this one in my arsenal. It was a hit with my entire family who kept asking if I was sure it was sugar-free! 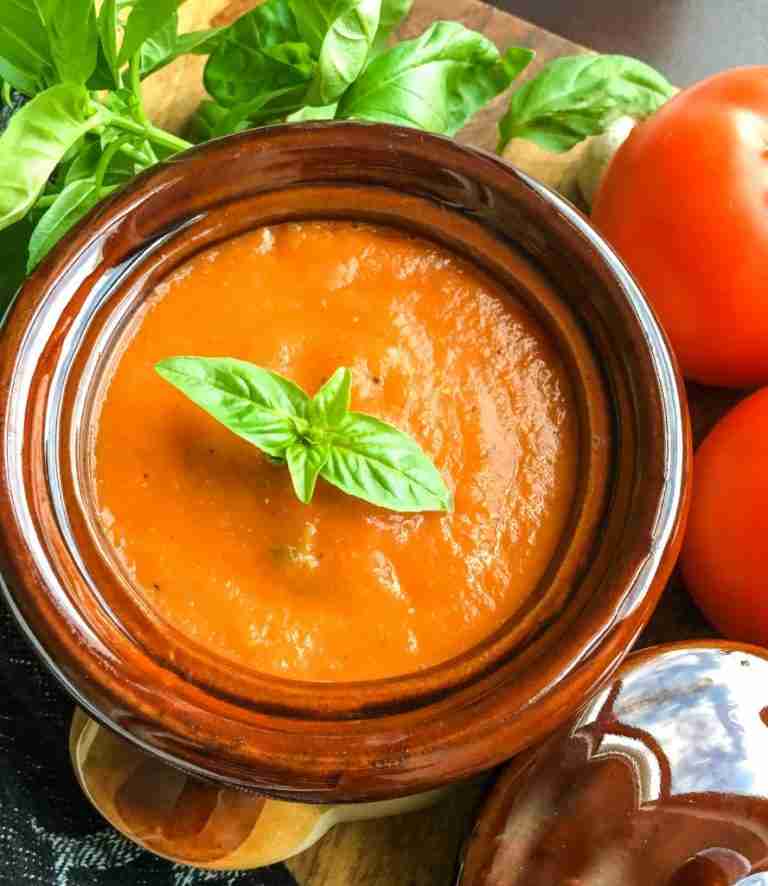 Fall is the perfect time of year to use up the last of your tomatoes and fresh garden basil for this instantly warming soup. It is deliciously vegan and low carb and can be made easily in your Instant Pot for a convenient delightful meal. This Instant Pot Tomato Basil Soup comes together in just… 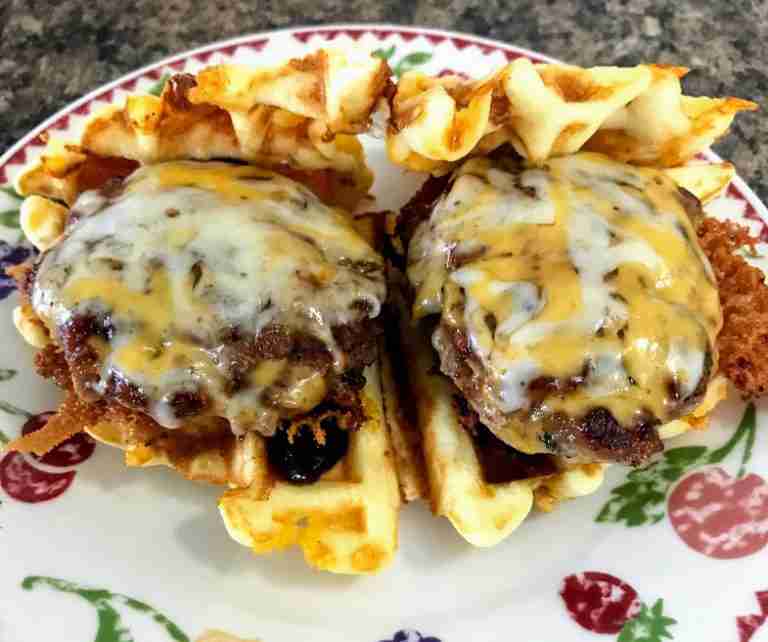 These keto pork sliders are ridiculously juicy, tasty and so easy to make. They were a hit for my entire household including my 9yo munchkin who well…ok she loves all types of burgers. This was my attempt at making a healthier burger for her to enjoy and that she did! I was surprised by how… 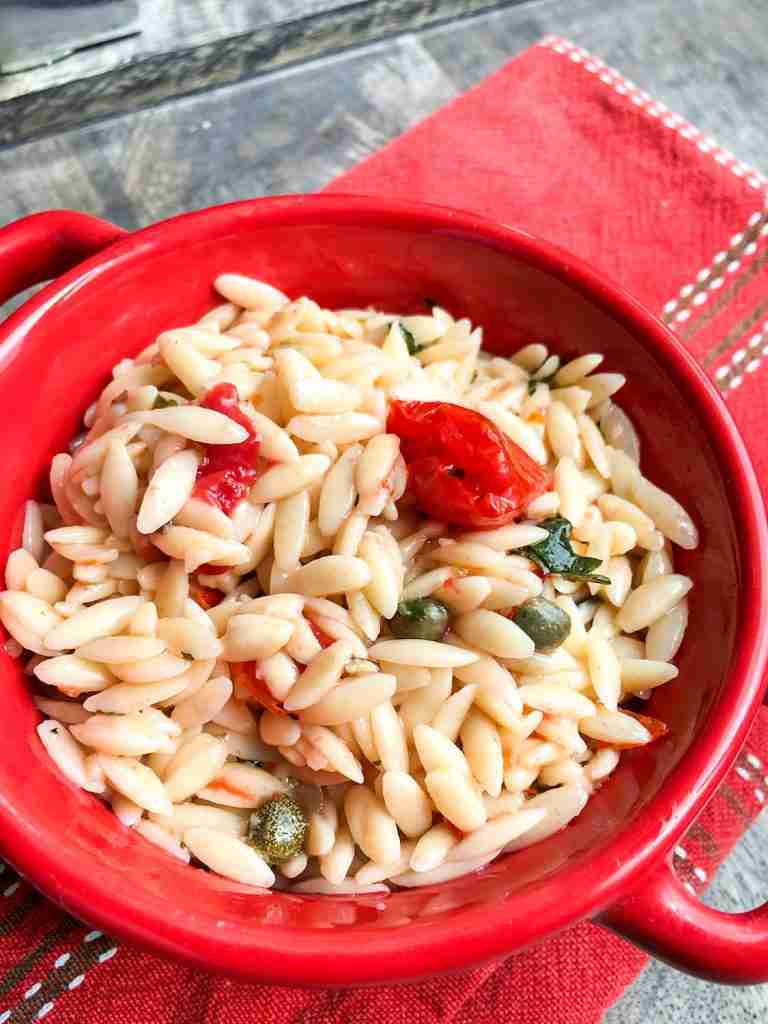 This Orzo Pasta Salad with Tomatoes and Capers is a perfect addition to your next summer barbecue. A fresh, crisp summer salad, it’s served chilled and therefore recommended that you prepare it beforehand to allow the flavors to be fully absorbed, while chilling overnight. Preparing this quick and easy salad beforehand also gives you more… 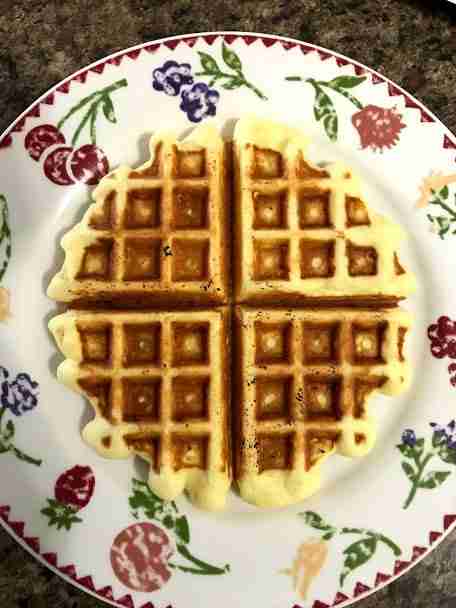 Coconut flour chaffles are great substitutes for bread! Chaffles made with coconut flour tend to come out soft with a texture of a freshly baked white bread, especially if made with cream cheese. This chaffle recipe uses a balanced mixture of cream cheese, coconut flour, and eggs. It makes a firm chaffle that is light… 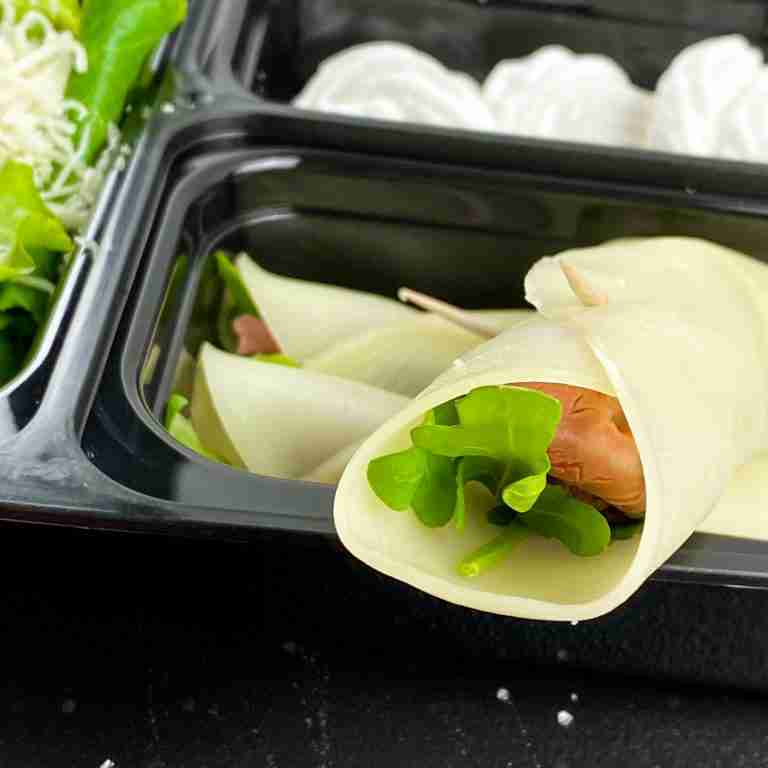 This super easy lunch idea can be paired with any low-carb sides of your choice. As shown, this light, but satisfying, lunch includes three rollups, one cup of mixed salad greens with a one-quarter cup each chopped cucumber and avocado, and five almond meringue cookies. The dressing is a simple drizzle of a little olive… 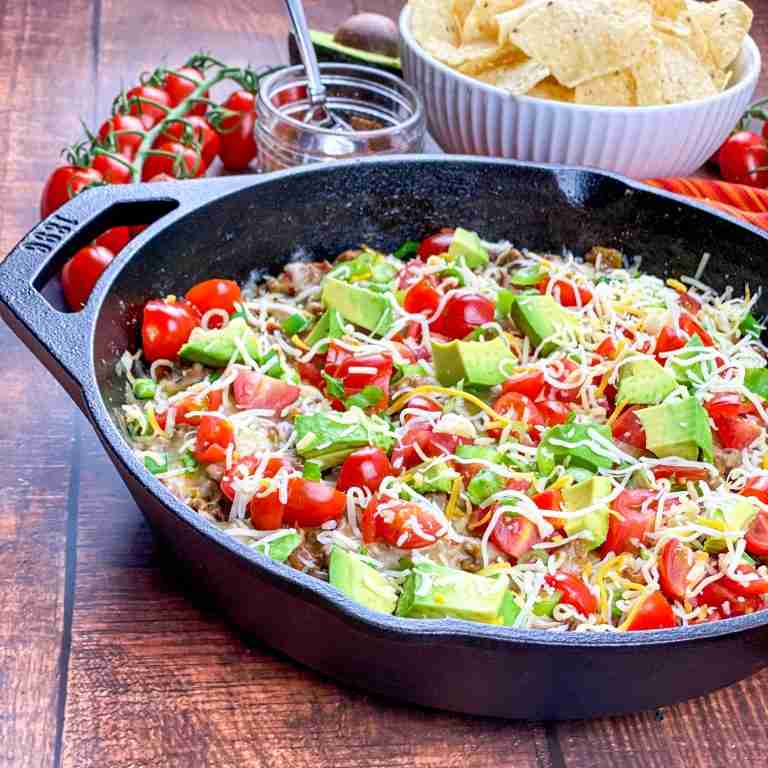 This easy and versatile 30-minute keto beef taco skillet can be served a couple of ways. For a delicious main course, serve with shredded lettuce, salsa, chopped tomatoes, extra cheese, and some warm keto taco shells or large lettuce leaves for wrapping. For a hearty appetizer, as shown here, serve with keto tortilla chips, pork…